Nordstrom is working with two tech companies, Attabotics and Tompkins Robotics, at one of its nine U.S. distribution centers.

The retailer is testing ways to speed deliveries and cut down on cardboard waste, while tackling other supply chain headaches.

Faced with mounting pressure from Amazon, companies are trying to figure out how to make same-day deliveries less costly.

NEWARK, California — If you’re in retail these days, you’re likely trying to solve these two problems: how to cut costs, and how to get products to your customers as quickly as possible.

Nordstrom thinks it has found a solution that will help it do both. And it starts at a warehouse in Newark, California.

The Seattle-headquartered company has tapped two new partners, robotics supply chain company Attabotics and parcel-sorting provider Tompkins Robotics, to test a more modern facility in the San Jose area. If successful, the retailer could expand its use to Nordstrom’s eight other U.S. distribution centers.

Nordstrom hopes a speedier and slimmed-down supply chain will help it rise above other department store operators that are struggling to win customers over the likes of Amazon, Walmart and Target. Nordstrom’s online sales are growing, up 16% in fiscal 2018, and make up 30% of total net sales, which were $15.48 billion last year. But revenue is meantime shrinking at its core department store business. So it’s looking for ways to keep stoking this growth engine. 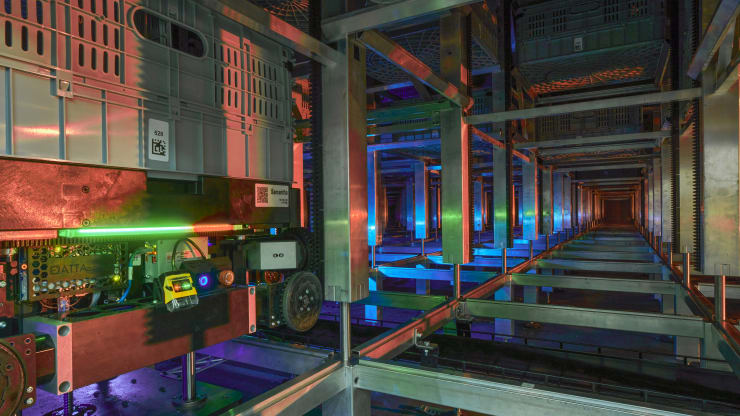 Nordstrom’s upgrades come as department stores are fighter harder and harder for every sale. Take beauty products. Shoppers used to think about department stores first when they thought about buying eye shadows or skin creams. But now they increasingly buying these items online at sites such as Glossier or Kylie Cosmetics, or at retailers such as Sephora and Ulta Beauty.

More apparel sales have also shifted online. And newer e-commerce companies have emerged on the scene, like Allbirds and Untuckit.

Department stores need to think about how these online retailers and Amazon are servicing their customers. Amazon seemingly continues to lower its threshold for same- and next-day shipping, so long as one pays $119 a year to be a Prime member.

By all accounts, they are. Ahead of this holiday season, Macy’s — as a pilot test — launched same-day delivery for certain items in more than two dozen U.S. markets. Kohl’s says it offers same-day delivery in “select neighborhoods” in cities including New York, Chicago, Los Angeles and Seattle. J.C. Penney earlier this week named Karl Walsh, chief digital officer at Pandora Jewelry, as its senior vice president and chief digital officer, as it looks to stage a turnaround.

Outside of department stores, retailers like Walmart and Target are also changing shoppers’ expectations. Target, for example, has found more ways than most to use the backs of its stores to either ship items same day or lure shoppers to pick up curbside.

Nordstrom’s investments are already being tested to see if the retailer can handle an influx of online orders, without sacrificing too much profit.

In an analysis of about 300,000 retail transactions done by Edison Trends, Nordstrom saw the biggest increase in online sales during Thanksgiving and Black Friday compared with a year ago, at 60%. The company was followed by Walmart, with a 53% gain, and Amazon, with a gain of 49%.

Investors this holiday season are looking for Nordstrom to stem sales declines. The retailer’s shares have fallen roughly 19% this year, to a market cap of about $5.8 billion.

During Nordstrom’s fiscal third quarter, total revenue fell to $3.67 billion from $3.75 billion a year ago, dragged down by weakness at its full-price business. Full-price sales dropped 4.1%, while sales at Nordstrom Rack, the retailer’s off-price brand, were up 1.2%. Nordstrom is calling for sales to fall 2% in fiscal 2019.

The decline in Nordstrom’s stock is less steep than that of rivals Macy’s, which has seen its stock fall nearly 49%. Kohl’s shares are down 29% year to date. Macy’s market cap has fallen to $4.7 billion, while Kohl’s is valued at $7.4 billion.

Disclosure: Comcast Ventures, a division of CNBC parent company Comcast, is an investor in Attabotics. 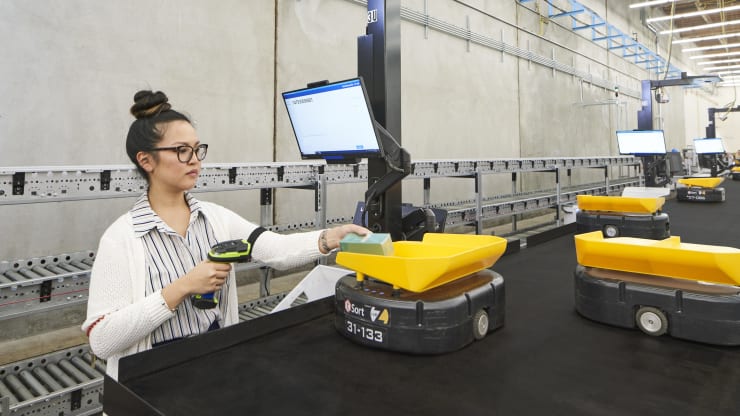